It’s been one entire month since I last did a blog post (and my last one even promised a topic coming soon)… oops. I’ve been crunching hard this month and working on loads of different features to try and bring various things up to a quality I would be happy to release. Of course, lots of polishing changes don’t make for interesting blog posts! On top of that, I spent a lot of time working on some stuff which ultimately I failed at so that was a lot of time spent with no results to talk about in a blog posts.

The old audio system in game was built on the basic XNA 3D audio system - it could render sounds in 3D and that was it - I have been intending to replace it with something better for months. Just recently I encountered a bug in the old audio system which was (occasionally) crashing the game. Rather than spending a load of time fixing an ultimately useless system I decided to bite the bullet and go ahead with my long planned swap to FMOD.

What is FMOD anyway? To quote myself from a few months back:

FMOD studio is an audio creation tool for your audio artists to use to create complex sound effects - using the studio you can create sounds which depends upon parameters and run complicated state machines and then the game can tweak those parameters at runtime and make your sounds responsive to in game events.

The FMOD programmers API is what you use in your game to playback these complicated sound effects. It handles stuff like loading lots of different file formats, generating sounds and effects in realtime, controlling occlusion and reverberation from geometry and positional sound.

That quote is from a blog post where I announced the release of SuperSonicSound, an open source library which wraps the FMOD C++ style API and presents it in a much more friendly C# style.

FMOD is great because it allows me to author really complex sounds including stuff such as multiple sounds playing, cues from the game, parameters from the game. When I load this sound up in the game I just… play it. No worrying about any of that complexity!

So here’s an example of the reload sound for a magnum:

At the start are 3 overlapping multisounds. Each time a multisound plays it chooses a single sound from a set to play, in this case it chooses randomly. After a small delay there is another multisound which randomly chooses one of several clicking noises for the chamber being closed. On top of all this there is some automatic modulation of pitch and volume - every single time any of these sounds play their pitch and modulation and randomly varied by a small amount.

All of this complexity was really easy to create in the editor, and to use it all in game the code is as simple as:

The next big thing I came to work on was characters and animations. At the moment the game has precisely one character, Zoe: 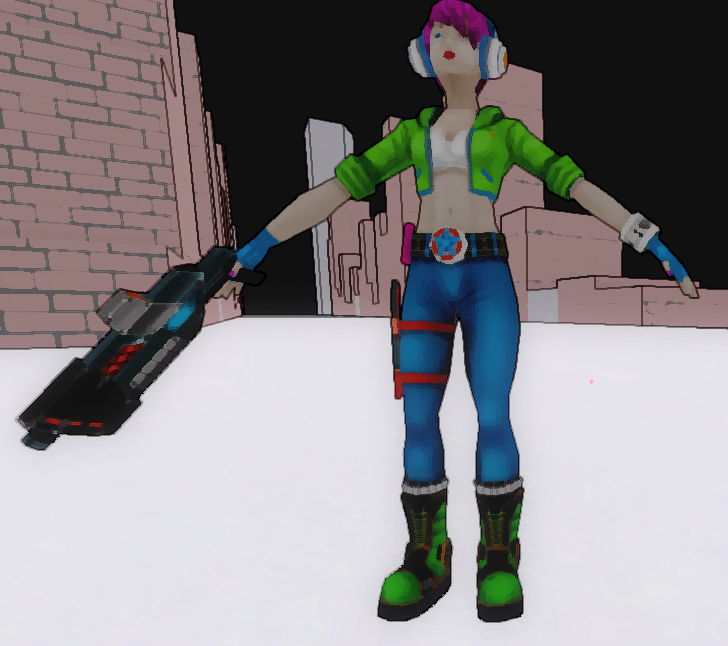 Zoe isn’t even the right style of character for the game so I need to totally new set of characters, preferably hundreds of them so I can fill up crowds of NPCs on the street. I found this amazing service called Mixamo which allows you to create characters in a tool called Fuse and then you can pick animations from their library of animations (which is huge, and expanding all the time) and then you just download it all and you’re good to go.

I signed up immediately! A few characters I quickly threw together in Fuse look pretty good:

In my experience anything to do with graphics and animations is a total nightmare. Unfortunately this time was no different. The obvious way to use Mixamo is to attach the same animations to every single one of my characters and download that, nice and simple. There are two problems here:

Luckily the solution to this isn’t too complex. Rather than downloading the same animations hundreds of times, just download them once and then retarget them to whatever NPC you want (at runtime). I spent an entire week working on this and still don’t have all of the bugs ironed out! The problem is that there are so many things that can go wrong:

There are loads of complex little issues here, often to do with some annoying thing like file formats or matrix handedness. After two weeks working on this I put it on the backburner - Mixamo is an awesome service and I’m definitely going to have to do this work in the near future, but for now it’s on hold.

Procedural generation has always been a core part of what is cool and unique about this game; there’s a limitless number of banks to rob! Sometimes a bank will be insecure because of what is next door and with procedural generation you can explore that possibility. Procedural generation was the earliest part of the engine which I built (a couple of years ago) and although I’ve come back to it a few times to add more complex features (e.g. Floorplan generation) I’ve never really properly demonstrated the full power of this fully armed and operational procedural development engine.

There’s a reason for this lack of complex demos: writing generation scripts is hard, it requires visualising lots of geometry in your head. This is why I’ve been using this same test level for so long, it hasn’t been worth the effort to build a huge new level.

Obviously before I make any kind of release I’m going to need some proper levels and I can’t rely upon building them entirely in code. To this end I’ve started building a tool called NODE/Machine. NODE/Machine is a toolkit for designing and building levels using the procedural generation system - split up into several independent tools for different jobs. All the tools link up to the game, so you can design an element (e.g. a floorplan) and then click a button to see it in game instantly.

This week I have been working on facade generation. It’s heavily work in progress, but here’s a quick demo of me throwing together a basic facade in NODE/Machine:

There are a couple of bugs here, but hopefully you get the idea - with this simple little markup language you can design walls to go into the game! Next week I’ll (hopefully) have these bugs stamped out and have a much more complicated and impressive looking demo actually rendering in game.