Ragdolls Are Hard In Which A Design Does Not Work

I’ve been working on ragdolls this week but the approach I took didn’t quite work as expected so they’re going to be done early next week instead.

As I said last week I’ve been planning to work on gameplay mechanics from now on. However gameplay mechanics needs a solid foundation and this week I decided to implement ragdolls - which I can then build a few other mechanics on top of. Ragdolls will support things like:

And although they’re not directly related, bodies are a component of:

Previously I had one big AnimationController class which did most of this work - but that was beginning to be a pain to maintain. So the first thing I did was split this into three classes, AnimationQueue which handles all the animation clip stuff:

Animated which handles most of the calculation:

And finally PlayingClip which handles playing back a single clip:

The Secret Sauce Is PlayingClip

Ragdolls are effectively procedurally generated animations - objects in the physics engine simulate particular bones and then you just need to supply that data, frame by frame, to the animation system. This new architecture has a class to do exactly that - PlayingClip is responsible for supplying the correct transforms for a particular point time. So all I have to do is place some objects into the physics engine, and create an instance of PlayingClip that copies transforms from them - easy. 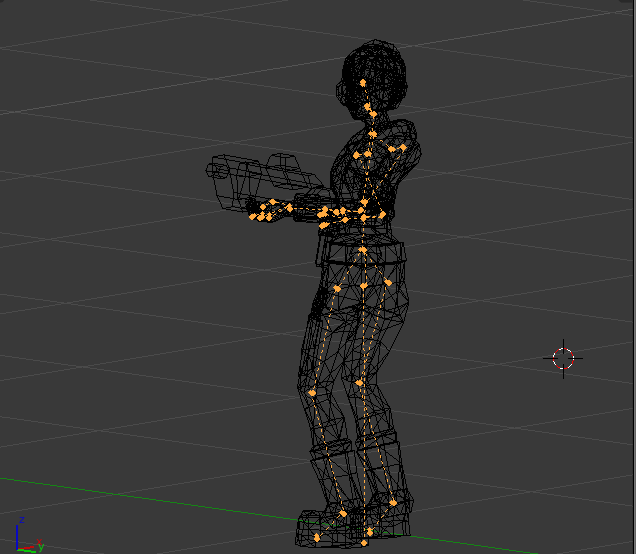 As you can see here the character model already has a skeleton - this is the skeleton that is driven by the animation system whenever an animation is playing from file. It makes sense just to directly put these bones into the physics engine so there’s a very close match up between animations from file and procedural animations from physics engine. Unfortunately the results were less than optimal: 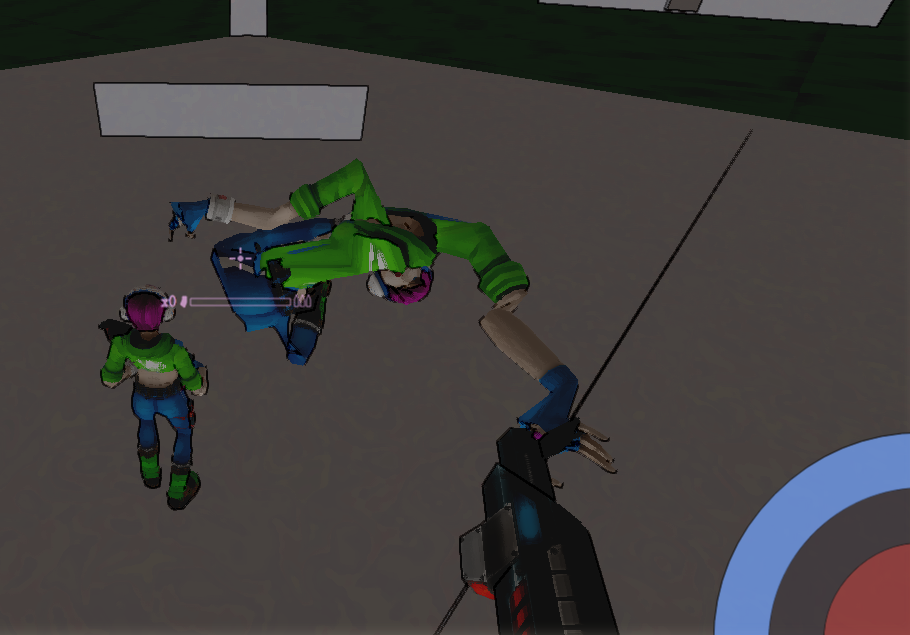 I’m so sorry for your loss.

So what happened? Well if you look closely at that diagram of the graphical skeleton again you’ll see two problems:

The graphical skeleton has a few bones with no vertices attached to them, for example the “root bone” runs from the floor (in between the two feet) up to the crotch and is the support which the rest of the skeleton is built on top of. The physics engine Really Hates these bones with zero mass/volume (which leads to even more instability and jittering).

Why Don’t We Just…

I tried a few things to fix this. For example the small bones around the fingers are troublesome because of their extremely low mass and tendency to collide with other fingers in troublesome ways - so I tried introducing a minimum mass limit (so fingers are much denser than the rest of the body) as well as making fingers not collide with one another. These kind of hacks changed the nature of the problems, but there were still some pretty nasty instability problems which make the system useless. In the end an amalgamation of hacks and workaround is not going to result is stable skeletons.

Fine Then, You Make The Skeleton

In the end, I decided that the solution to this problem is to not use the graphical skeleton to generate the physical skeleton - they’re used in different ways and there’s just too much of a mismatch between them. Instead I started writing a content pipeline extension which allows you to define a skeleton in an XML and this will be processed into an efficient to load binary skeleton definition when you compile it. Although I wanted to avoid more content authoring workload if possible I don’t think this is too bad - writing the skeleton definitions is pretty simple and then just needs a little bit of tweaking to get a good skeleton.

Hopefully I should get hand authored ragdolls done in a couple of days and then I can move onto something else. I’m thinking either dragging bodies or hand to hand combat (although maybe I’ll find something else entirely unrelated to ragdolls instead)!