Procedural Generation For Dummies: Road Generation In Which Tractable Tensors Are Traced Terrifically

The majority of road generation systems I have looked at tend to be based on a growth system. The general algorithm (see page 15, Section 3.2 of this paper) for pretty much all of them is pretty simple.

Or in pseudo code:

Hopefully this is fairly clear. We simply generate a load of candidate points (in the GlobalGoals function), add them to a priority queue and then accept or reject each individual segment (in the CheckLocalConstraints method). The real variety between different algorithms comes in how you generate new constraints and how you express your global goals.

This is our method for producing new segments according to large scale global goals. For example one possible implementation would be to generate a single new segment at the end of the input segment which leads towards the local population centre. This would generate you one long road which leads from your random seed point directly to the population center and then stops.

The critical part of this method is that it generates segments with no concern for if they are possible. This means global goals can be very fast and simple to implement.

This is our method for accepting, rejecting and modifying individual segments according to small scale local constraints. For example we could come up with a set of rules such as:

As you can see these rules are all about correcting small errors to improve the local consistency of the road network.

My implementation is based off the paper Interactive Procedural Street Modeling (Chen, Esch, Wonka, Mueller, Zhang, 2008). If you’re not up for reading the paper then there’s a short (5 minute) video here with an overview of the technique.

How this systems works is twofold. First you generate a tensor field (if you don’t know what a tensor is don’t worry about it - in this system the tensors are just 2 dimensional vectors) and then you trace lines through the field (following the tensors).

So what use are these tensor fields? Above you can see a tracing of the most basic tensor field - a grid. This is simply the same tensor repeated everywhere and since the major and minor vectors of the tensor are perpendicular we end up with a grid! The paper defines several methods for generating tensor fields for different situations:

The really cool thing about tensors is that we have ways to easily combine them. If you have multiple tensor fields it turns out that if you simply take a weighted average of all the fields you end up with a sensible result which you can trace. If your weight is set to fall off with distance you can define different tensor fields in different locations and they will slowly blend together as the weight changes! 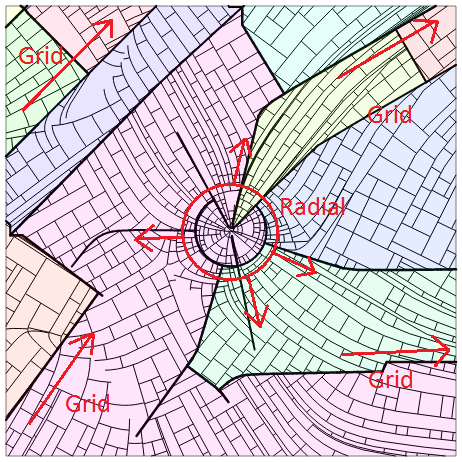 You can clearly see the five different elements and how the roads smoothly transition from following one to following the next.

As mentioned at the start of the article the source code for my implementation of this system is here. The specific code for tracing through tensor fields and building a road network is here.

Before I dive into details I should say that this implementation is one of the parts of the city generation system I am most unhappy about. Tracing vectors is extremely sensitive to errors because the errors accumulate along the entire length of the streamline. Additionally the tracing can be quite slow, most of the example images in this post took 5-10 seconds to generate (which isn’t unusably slow, as we only need to do this step once per city).

The first step is to build a tensor field. Right now I’m just doing this by hand but ultimately I’d like to do this automatically - for example:

Now we have two vector fields, we need to trace a line through these fields, a streamline. Conceptually tracing through a vector field is trivial:

However this turns out not to work very well. Because this only samples one single point from the field it is extremely sensitive to local noise and does not work at all when the field is highly curved (e.g. around a radial field). Instead I use an RK4 integrator to handle the higher curvature (see this excellent article for more details on integration):

How does this all fit into the algorithm I outlined at the top? This vector tracing is effectively the Global Goals function - a single streamline is a collection of candidate segments to add into the map. The global goals in this case are the underlying tensor fields.

How we handle the line segments traced through the vector field is our Local Constraints function.

Rather than keeping a buffer of all the segments of a streamline and handling them one by one, an entire streamline is traced out and stops when a segment is rejected - this is just an optimisation to save a load of bookkeeping work. You can see the method which traces streamlines here and the method which creates each segment (and checks constraints) here.

If any of these conditions is met the streamline is stopped:

So far I have described the process of tracing out one single streamline through a vector field until it terminates. However, a road network is obviously formed from more than a single streamline!

As a streamline is being traced seed points are created and added to a priority queue. Each seed is associated with two pieces of information; the position and which field to trace the new streamline through. If we’re currently tracing a major streamline then the new one will be minor and vice versa.

When a streamline ends (due to one of the conditions laid out above) the highest priority seed is selected and becomes the start of a new streamline. Priority of the seed is simply sampled from a scalar field - this could be something like a population density field so that there are more roads created in high population areas.

In this post I’ve covered a high level overview of how a tensor based road growth system works, as well as details on implementation of such a system. Next time we’ll look at how to generate building lots in the spaces between roads.